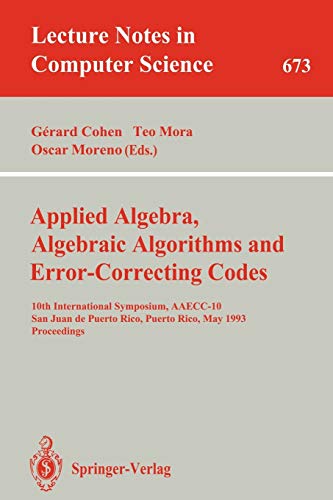 This volume is the proceedings of the 10th International Symposium on Applied Algebra, Algebraic Algorithms and Error-Correcting Codes (AAECC 10),held in Puerto Rico, May 1993. The aim of the AAECC meetings is to attract high-level research papers and to encourage cross-fertilization among different areas which share the use of algebraic methods and techniques for applications in the sciences of computing, communications, and engineering. The AAECC symposia are mainly devoted to research in coding theory and computer algebra. The theoryof error-correcting codes deals with the transmission of information in the presence of noise. Coding is the systematic use of redundancy in theformation of the messages to be sent so as to enable the recovery of the information present originally after it has been corrupted by (not too much)noise. Computer algebra is devoted to the investigation of algorithms, computational methods, software systems and computer languages, oriented to scientific computations performed on exact and often symbolic data, by manipulating formal expressions by means of the algebraic rules they satisfy. Questions of complexity and cryptography are naturally linked with both coding theory and computer algebra and represent an important share of the area covered by AAECC.

Sequence based methods for data transmission and source compression.- On the apparent duality of the Kerdock and Preparata codes.- Bounds for codes as solutions of extremum problems for systems of orthogonal polynomials.- Systems of algebraic equations solved by means of endomorphisms.- Criteria for sequence set design in CDMA communications.- Using Groebner bases to determine the algebraic and transcendental nature of field extensions: Return of the killer tag variables.- A "Divide and conquer" algorithm for Hilbert-Poincare series, multiplicity and dimension of monomial ideals.- An efficient algorithm for the sparse mixed resultant.- Some features of binary block codes for correcting asymmetric errors.- Fixed-parameter complexity and cryptography.- A class of algebraic geometric codes from curves in high-dimensional projective spaces.- A new class of sequences: Mapping sequences.- A zero-test and an interpolation algorithm for the shifted sparse polynomials.- Parallelization of quantifier elimination on a workstation network.- Hyperplane sections of fermat varieties in P 3 in char. 2 and some applications to cyclic codes.- Analysis of Coppersmith's block Wiedemann algorithm for the parallel solution of sparse linear systems.- Relations among Lie formal series and construction of symplectic integrators.- Exponential sums as discrete fourier transform with invariant phase functions.- Application of finite fields to memory interleaving.- An elementary proof of a partial improvement to the Ax-Katz Theorem.- Energy functions associated with error-correcting codes.- On determining all codes in semi-simple group rings.- On hyperbolic cascaded Reed-Solomon codes.- Peak-shift and bit error-correction with channel side information in runlength-limited sequences.- On a third order differential equation whose differential Galois group is the simple group of 168 elements.- Approximating the number of error locations within a constant ratio is NP-complete.- Two chosen-plaintext attacks on the Li-Wang joint authentication and encryption scheme.- Some constructions of perfect binary codes.