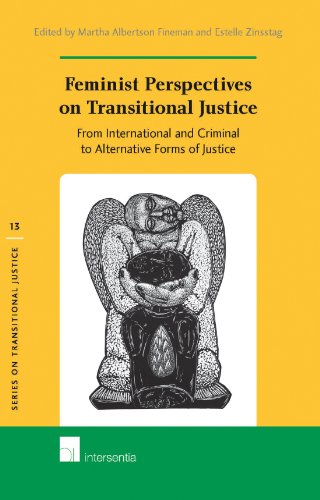 Truth-seeking mechanisms, international criminal law developments, and other forms of transitional justice have become ubiquitous in societies emerging from long years of conflict, instability and oppression and moving into a post-conflict, more peaceful era. In practice, both top-down and bottom-up approaches to transitional justice are being formally and informally developed in places such as South Africa, Liberia, Peru, Chile, the Democratic Republic of Congo, Sierra Leone, Rwanda, the former Yugoslavia, and Northern Ireland. Many studies, conferences and debates have taken place addressing these developments and providing elaboration of theories relating to transition justice generally. However, rarely have these processes been examined and critiqued through a feminist lens. The position of women, particularly their specific victimisation, typically has not been taken into account in any systematic manner. Seldom do commentators specifically consider whether the recently developed mechanisms for promoting peace and reconciliation will actually help the position of women in a society moving out of repression or conflict. This is unfortunate, since women's issues are often overlooked and post-conflict societies, because they must rebuild, are ideally poised to introduce standards that would enable and ensure the active participation of the entire population, including women, in rebuilding a more stable, fair and democratic polity. This book offers some insights into women's perspectives and feminist views on the topic of transitional justice or 'justice in transition'. Bringing feminism into the conversation allows us to expand the possibilities for a transformative justice approach after a period of conflict or insecurity, not by replacing it with feminist theory, but by broadening the scope and vision of the potential responses.