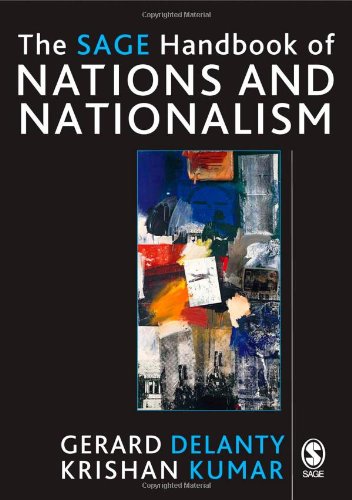 The SAGE Handbook of Nations and Nationalism

'With its list of distinguished contributors and its wide range of topics, the handbook is surely destined to become an invaluable resource for all serious students of nationalism' - Michael Billig, Professor of Social Sciences at Loughborough University and author of 'Banal Nationalism' (SAGE 1995) 'The persistence - some would say: revival - of nationalism across the recent history of modernity, in particular the past two decades, has taken many scholars in the social sciences by surprise. In response, interest in the analysis of nationalism has increased and given rise to a great variety of new angles under which to study the phenomenon. What was missing in the cacophony of voices addressing nationalism was a volume that brought them together and confronted them with each other. This handbook does just that.It deserves particular praise for the wide range of approaches and topic included and for the systematic attempt at studying nationalism as a phenomenon of our time, not a remnant from the past' - Peter Wagner, Professor of Social and Political Theory, European University Institute; and Professor of Sociology, University of Warwick 'For students concerned with the contemporary study of nationalism this will be an invaluable publication. The three-fold division into approaches, themes and cases is a very solid and sensible one. The editors have commissioned essays from leading scholars in the field [and]this handbook provides the best single-volume overview of contemporary nationalism' - John Breuilly, Professor of Nationalism and Ethnicity, London School of Economics Nationalism has long excited debate in political, social and cultural theory and remains a key field of enquiry among historians, anthropologists, sociologists as well as political scientists. It is also one of the critical media issues of our time. There are, however, surprisingly few volumes that bring together the best of this intellectual diversity into one collection.This Handbook gives readers a critical survey of the latest theories and debates and provides a glimpse of the issues that will shape their future. Its three sections guide the reader through the theoretical approaches to this field of study, its major themes - from modernity to memory, migration and genocide - and the diversity of nationalisms found around the globe. The overall aim of this Handbook is to relate theories and debates within and across a range of disciplines, illuminate themes and issues of central importance in both historical and contemporary contexts, and show how nationalism has impacted upon and interacted with other political and social forms and forces. This book provides a much-needed resource for scholars in international relations, political science, social theory and sociology.