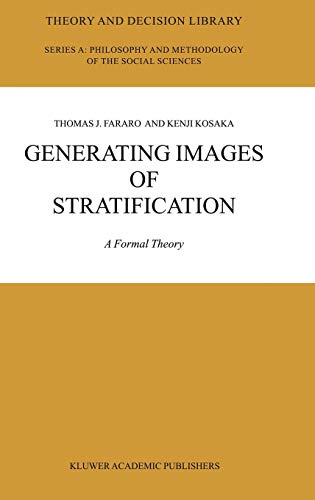 Generating Images of Stratification: A Formal Theory (Theory and Decision Library A: (35))

Generating Images of Stratification is a self-contained presentation of a theoretical research program that deals with a significant explanatory problem relating to social inequality and that constructs generative theoretical models in doing so. In more detail: -Self-contained presentation - In respect to the background sociological facts and theoretical ideas and also the formal methods the book provides clear and simple accounts accompanied by examples. - A theoretical research program - The emphasis is on theory development, involving a series of theoretical models constructed within a core framework of principles and methods. - Deals with a significant explanatory problem relating to social inequality - We know from research that how people perceive the stratification system of a society depends upon their position in that system. So the problem is: What process generates this regularity and thereby explains empirical generalizations about the social structuration of images? - Constructs generative theoretical models - The book is an extended presentation of "generative theory" in sociology, a formal method of producing effective theoretical explanations. Generating Images of Stratification is of interest to mathematical sociologists and formal theorists in sociology; sociologists interested in social stratification; methodologists, both in sociology and in other fields; philosophers of social science; and theoretical scientists and mathematicians who are interested in applying their analytical tools to social science topics.