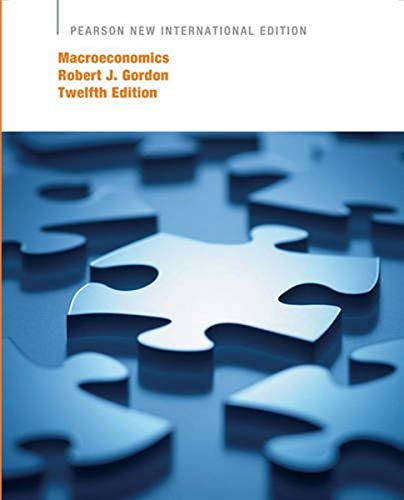 Macroeconomics is widely praised for its ability to present theory as a way of evaluating key macro questions, such as why some countries are rich and others are poor. Students have a natural interest in what is happening today and what will happen in the near future. Macroeconomics capitalizes on their interest by beginning with business cycles and monetary-fiscal policy in both closed and open economy. After that, Gordon presents a unique dynamic analysis of demand and supply shocks as causes of inflation and unemployment, followed by a dual approach to economic growth in which theory and real-world examples are used to compare rich and poor countries. MyEconLab New Design is now available for this title! MyEconLab New Design offers: *One Place for All of Your Courses. Improved registration experience and a single point of access for instructors and students who are teaching and learning multiple MyLab/Mastering courses. *A Simplified User Interface. The new user interface offers quick and easy access to Assignments, Study Plan, eText & Results, as well as additional option for course customization. *New Communication Tools. The following new communication tools can be used to foster collaboration, class participation, and group work. *Email: Instructors can send emails to their entire class, to individual students or to instructors who has access to their course. *Discussion Board: The discussion board provides students with a space to respond and react to the discussions you create. These posts can also be separated out into specific topics where students can share their opinions/answers and respond to their fellow classmates' posts. *Chat/ ClassLive: ClassLive is an interactive chat tool that allows instructors and students to communicate in real time. ClassLive can be used with a group of students or one-on-one to share images or PowerPoint presentations, draw or write objects on a whiteboard, or send and received graphed or plotted equations. ClassLive also has additional classroom management tools, including polling and hand-raising. *Enhanced eText. Available within the online course materials and offline via an iPad app, the enhanced eText allows instructors and students to highlight, bookmark, take notes, and share with one another.