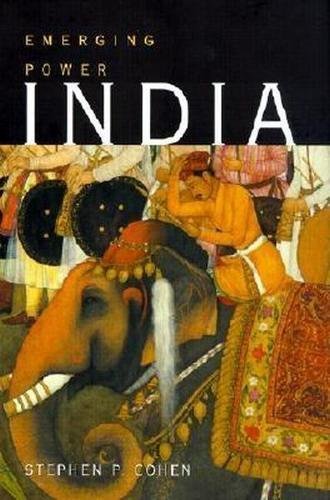 For years, Americans have seen India as a giant but inept state. That negative image is now obsolete. After a decade of drift and uncertainty, India is taking its expected place as one of the three major states of Asia. Its pluralist, secular democracy has allowed the rise of hitherto deprived castes and ethnic communities. Economic liberalization is gathering steam, with six percent annual growth and annual exports in excess of #30 billion. India also has a modest capacity to project military power. The country will soon have a two-carrier navy and it is developing a nuclear-armed missile capable of reaching all of Asia. This landmark book provides the first comprehensive assessment of India as a political and strategic power since India's nuclear tests, its 1999 war with Pakistan, and its breakthrough economic achievements. Stephen P. Cohen examines the domestic and international causes of India's "emergence," he discusses the way social structure and tradition shape Delhi's perceptions of the world, and he explores India's relations with neighboring Pakistan and China, as well as the United States. Cohen argues that American policy needs to be adjusted to cope with a rising India --and that a relationship well short of alliance, but far more intimate than in the past, is appropriate for both countries.