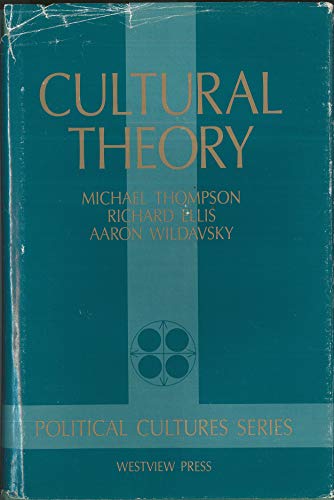 Why do people want what they want? Why does one person see the world as a place to control, while another feels controlled by the world? A useful theory of culture, the authors contend, should start with these questions, and the answers, given different historical conditions, should apply equally well to people of all times, places, and walks of life.Taking their cue from the pioneering work of anthropologist Mary Douglas, the authors of Cultural Theory have created a typology of five ways of life--egalitarianism, fatalism, individualism, hierarchy, and autonomy--to serve as an analytic tool in examining people, culture, and politics. They then show how cultural theorists can develop large numbers of falsifiable propositions.Drawing on parables, poetry, case studies, fiction, and the Great Books, the authors illustrate how cultural biases and social relationships interact in particular ways to yield life patterns that are viable, sustainable, and ultimately, changeable under certain conditions. Figures throughout the book show the dynamic quality of these ways of life and specifically illustrate the role of surprise in effecting small- and large-scale change.The authors compare Cultural Theory with the thought of master social theorists from Montesquieu to Stinchcombe and then reanalyze the classic works in the political culture tradition from Almond and Verba to Pye. Demonstrating that there is more to social life than hierarchy and individualism, the authors offer evidence from earlier studies showing that the addition of egalitarianism and fatalism facilitates cross-national comparisons.

* Sociocultural Viability: An Introduction The Theory * Introduction to Part One: Against Dualism * The Social Construction of Nature * Making Ends Meet * Preferences * Ringing the Changes * Instability of the Parts, Coherence of the Whole The Masters * Introduction to Part Two: The Indispensability of Functional ExplanationMontesquieu, Comte, and SpencerDurkheimMarxWeberMalinowski, Radcliffe-Brown, and ParsonsMerton, Stinchcombe, and Elster Political Cultures * Introduction to Part Three: Cultures Are Plural, Not SingularThe Missing Ways of Life: Egalitarianism and FatalismAmerican Political SubculturesThe Civic Culture ReexaminedHard Questions, Soft Answers