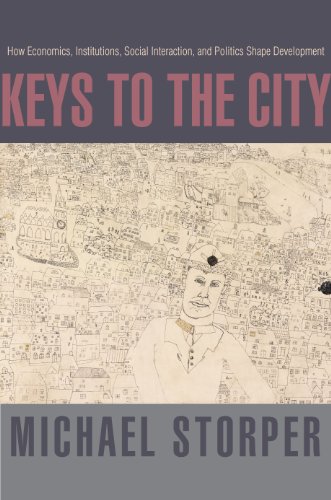 Keys to the City: How Economics, Institutions, Social Interaction, and Politics Shape Development

Why do some cities grow economically while others decline? Why do some show sustained economic performance while others cycle up and down? In Keys to the City, Michael Storper, one of the world's leading economic geographers, looks at why we should consider economic development issues within a regional context--at the level of the city-region--and why city economies develop unequally. Storper identifies four contexts that shape urban economic development: economic, institutional, innovational and interactional, and political. The book explores how these contexts operate and how they interact, leading to developmental success in some regions and failure in others. Demonstrating that the global economy is increasingly driven by its major cities, the keys to the city are the keys to global development. In his conclusion, Storper specifies eight rules of economic development targeted at policymakers. Keys to the City explains why economists, sociologists, and political scientists should take geography seriously.

Acknowledgments ix 1. Introduction. Cities and Regions in the Twenty-First Century: Why Do They Develop and Change? 1 PART I THE ECONOMIC CONTEXT OF CITY AND REGIONAL DEVELOPMENT 2. Workshops of the World Economy: People, Jobs, and Places 14 3. The Motor of Urban Economies: Specialization 32 4. Disruptive Innovation: Geography and Economics 52 5. Cities and Individuals: How We Shape Cities, But Not the Way We Want To 67 PART II THE INSTITUTIONAL CONTEXT OF CITIES AND REGIONS 6. Winner and Loser Regions: The &quot;Where&quot; of Development 92 7. Communities and the Economy 104 8. Robust Action: Society, Community, and Development 115 PART III SOCIAL INTERACTION AND URBAN ECONOMIES 9. Technology, Globalization, and Local Interaction 140 10. Local Context: The Genius of Cities 156 11. Face-to-Face Contact 167 PART IV THE POLITICAL CONTEXT OF CITY AND REGIONAL DEVELOPMENT 12. Exit or Voice? Politics, Societies, and City-Systems 184 13. Justice, Efficiency, and Cities: Should Regions Help One Another? 204 Conclusion. Dear Policymaker: Some Keys for You 224 Notes 229 References 239 Index 267