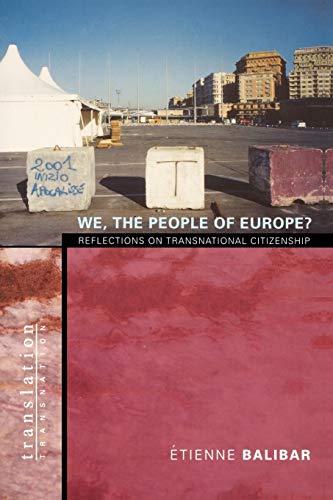 We, the People of Europe? (Translation/Transnation)

tienne Balibar has been one of Europe's most important philosophical and political thinkers since the 1960s. His work has been vastly influential on both sides of the Atlantic throughout the humanities and the social sciences. In We, the People of Europe?, he expands on themes raised in his previous works to offer a trenchant and eloquently written analysis of "transnational citizenship" from the perspective of contemporary Europe. Balibar moves deftly from state theory, national sovereignty, and debates on multiculturalism and European racism, toward imagining a more democratic and less state-centered European citizenship. Although European unification has progressively divorced the concepts of citizenship and nationhood, this process has met with formidable obstacles. While Balibar seeks a deep understanding of this critical conjuncture, he goes beyond theoretical issues. For example, he examines the emergence, alongside the formal aspects of European citizenship, of a "European apartheid," or the reduplication of external borders in the form of "internal borders" nurtured by dubious notions of national and racial identity. He argues for the democratization of how immigrants and minorities in general are treated by the modern democratic state, and the need to reinvent what it means to be a citizen in an increasingly multicultural, diversified world. A major new work by a renowned theorist, We, the People of Europe? offers a far-reaching alternative to the usual framing of multicultural debates in the United States while also engaging with these debates.

PREFACE vii 1 At the Borders of Europe 1 2 Homo nationalis: An Anthropological Sketch of the Nation-Form 11 Droit de cite or Apartheid? 31 4 Citizenship without Community? 51 5 Europe after Communism 78 6 World Borders, Political Borders 101 7 Outline of a Topography of Cruelty: Citizenship and Civility in the Era of Global Violence 115 8 Prolegomena to Sovereignty 133 9 Difficult Europe: Democracy under Construction 155 10 Democratic Citizenship or Popular Sovereignty? Reflections on Constitutional Debates in Europe 180 11 Europe: Vanishing Mediator? 203 NOTES 237 INDEX 283