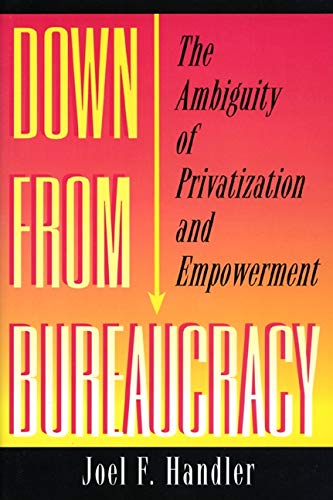 Down from Bureaucracy: The Ambiguity of Privatization and Empowerment (The William G. Bowen Series, 24)

Throughout the world, politicians are dismantling state enterprises and heaping praise on private markets, while in the United States a new rhetoric of ??i??citizen empowerment??i??i??' links a widespread distrust of government to decentralization and privatization. Here Joel Handler asks whether this restructuring of authority really allows ordinary citizens to take more control of the things that matter in their roles as parents and children, teachers and students, tenants and owners, producers and consumers. Looking at citizens as stakeholders in the modern social welfare state created by the New Deal, he traces the surprising ideological shifts of empowerment from its beginning as a cornerstone of the war on poverty in the 1960s to its central place in conservative market-based voucher schemes for school reform in the 1990s. Handler shows that in the past the gains from decentralization have proved to be more symbol than substance: some disadvantaged members of society will find new opportunities in the changes of the 1990s, but others will simply experience powerlessness under another name. He carefully distinguishes ??i??empowerment by invitation??i??i??' (in special education, worker safety, home health care, public housing tenancy, and neighborhood organizations) from the ??i??empowerment by conflict??i??i??' exemplified by the radical decentralization of the Chicago public schools. What emerges is a map of the major pitfalls and possible successes in the current journey away from a discredited regulatory state.