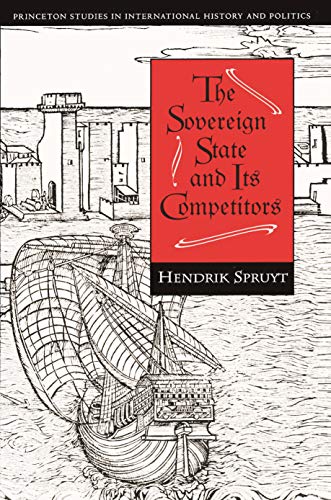 The Sovereign State and Its Competitors: An Analysis of Systems Change (Princeton Studies in International History and Politics)

The present international system, composed for the most part of sovereign, territorial states, is often viewed as the inevitable outcome of historical development. Hendrik Spruyt argues that there was nothing inevitable about the rise of the state system, however. Examining the competing institutions that arose during the decline of feudalism - among them urban leagues, independent communes, city states, and sovereign monarchies - Spruyt disposes of the familiar claim that the superior size and war-making ability of the sovereign nation-state made it the natural successor to the feudal system. The author argues that feudalism did not give way to any single successor institution in simple linear fashion. Instead, individuals created a variety of institutional forms, such as the sovereign, territorial state in France, the Hanseatic League, and the Italian city-states, in reaction to a dramatic change in the medieval economic environment. Only in a subsequent selective phase of institutional evolution did sovereign, territorial authority prove to have significant institutional advantages over its rivals. Sovereign authority proved to be more successful in organizing domestic society and structuring external affairs. Spruyt's interdisciplinary approach not only has important implications for change in the state system in our time, but also presents a novel analysis of the general dynamics of institutional change.

List of Maps and Tables Pt. IContingency, Choice, and Constraint Ch. 1Structural Change in International Relations Ch. 2Organizational Variation and Selection in the International System Ch. 3Modes of Nonterritorial Organization: Feudalism, the Church, and the Holy Roman Empire Pt. IIThe Emergence of New Modes of Organization Ch. 4The Economic Renaissance of the Late Middle Ages Ch. 5The Rise of the Sovereign, Territorial State in Capetian France Ch. 6The Fragmentation of the German Empire and the Rise of the Hanseatic League Ch. 7The Development of the Italian City-states Pt. IIICompetition, Mutual Empowerment, and Choice: The Advantages of Sovereign Territoriality Ch. 8The Victory of the Sovereign State Pt. IVConclusion Ch. 9Character, Tempo, and Prospects for Change in the International System Notes Bibliography Index