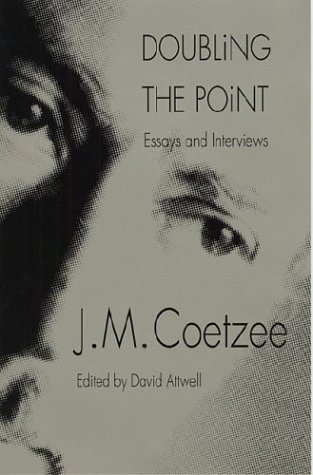 Doubling the Point: Essays and Interviews

Nadine Gordimer has written of J.M. Coetzee that his "vision goes to the nerve-centre of being. What he finds there is more than most people will ever know about themselves, and he conveys it with a brilliant writer's mastery of tension and elegance". "Doubling the Point" takes the reader to the center of that vision. These essays and interviews, documenting Coetzee's longtime engagement with his own culture, and with modern culture in general, constitute a literary autobiography. Centrally concerned with the form and content of fiction, "Doubling the Point" provides insight into the significance of certain writers (particularly modernists such as Kafka, Musil, and Beckett), the value of intellectual movements (from structuralism and structural linguistics on through deconstruction), and the issues of political involvement and responsibility - not only for Coetzee's own work, but for fiction writing in general. In interviews prefacing each section of the book, Coetzee reflects on the essays to follow and relates them to his life and work. In these interviews editor David Attwell prompts from Coetzee answers of depth and interest. The result is the story of a fiction writer's intellectual development, and of an intellectual's literary development. It is the story of how one writer has moved through the scholarly and political trends of the last 30 years, carefully assessing their applications and limitations, and through this experience forged for himself a unique and powerful literary voice informed in equal parts by life and learning.

* Author's Note * Editor's Introduction Beckett * Interview * The Comedy of Point of View in Beckett's Murphy (1970) * The Manuscript Revisions of Beckett's Watt (1972) * Samuel Beckett and the Temptations of Style (1973) * Remembering Texas (1984) The Poetics of Reciprocity * Interview</li * Achterberg's "Ballade van de gasfitter": The Mystery of I and You (1977) * The First Sentence of Yvonne Burgess' The Strike (1976) * A Note on Writing (1984) * Jerusalem Prize Acceptance Speech (1987) Popular Culture * Interview * Captain America in American Mythology (1976) * The Burden of Consciousness in Africa (1977) * Four Notes on Rugby (1978) * Triangular Structures of Desire in Advertising (1980) Syntax * Interview * The Rhetoric of the Passive in English (1980) * The Agentless Sentence as Rhetorical Device (1980) * Isaac Newton and the Ideal of a Transparent Scientific Language (1982) Kafka * Interview * Time, Tense, and Aspect in Kafka's "The Burrow" (1981) * Robert Musil's Stories of Women (1986) Autobiography and Confession * Interview * Confession and Double Thoughts: Tolstoy, Rousseau, Dostoevsky (1985) Obscenity and Censorship * Interview * The Taint of the Pornographic: Defending (against) Lady Chatterley (1988) * Censorship in South Africa (1990) South African Writers * Interview * Man's Fate in the Novels of Alex La Guma (1974) * Into the Dark Chamber: The Writer and the South African State (1986) * Athol Fugard, Notebooks, 1960--1977 (1984) * Breyten Breytenbach, True Confessions of an Albino Terrorist and Mouroir (1985) * Nadine Gordimer, The Essential Gesture (1989) Retrospect * Interview * Notes * Sources and Credits * Index