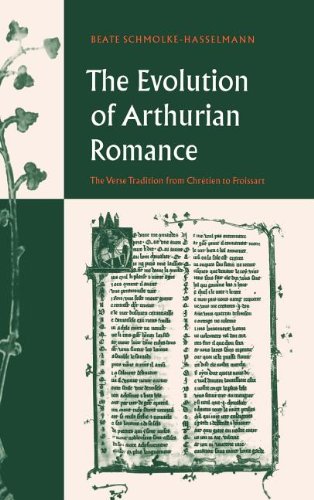 The Evolution of Arthurian Romance: The Verse Tradition from Chrétien to Froissart (Cambridge Studies in Medieval Literature, Series Number 35)

This 1998 study serves as a contribution to both reception history, examining the medieval response to Chretien's poetry, and genre history, suveying the evolution of Arthurian verse romance in French. It describes the evolutionary changes taking place between Chretien's Eric et Enide and Froissart's Meliador, the first and last examples of the genre, and is unique in placing Chretien's work, not as the unequalled masterpieces of the whole of Arthurian literature, but as the starting point for the history of the genre, which can subsequently be traced over a period of two centuries in the French-speaking world. Beate Schmolke-Hasselmann's study was first published in German in 1985, but her radical argument that we need urgently to redraw the lines on the literary and linguistic map of medieval Britain and France is only now being made available in English.

Acknowledgements Introduction Part I. The Response to Chretien: Tradition and Innovation in Arthurian Romance: 1. The stigma of decadence 2. Consolidation of the form 3. Changes in the relationship between ideals and reality 4. Knight or lover: Gawain as a paragon divided 5. Old matiere, new sens: innovation in thought and content 6. Aspects of the response to Chretien: from plagiarism to nostalgia Part II. An Historical Survey of the Impact of the Arthurian Verse Romances: 7. The popularity of Arthurian verse romances 8. The audience 9. Arthurian literature in French and its significance for England Bibliography Index.