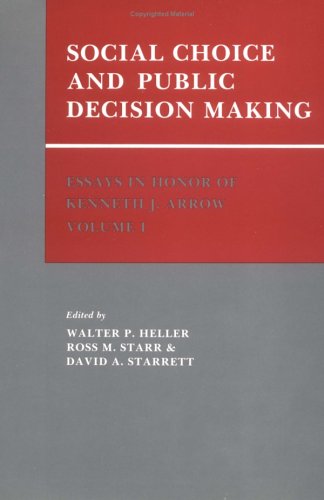 Professor Kenneth J. Arrow is one of the most distinguished economic theorists. He has played a major role in shaping the subject and is honoured by the publication of three volumes of essays on economic theory. Each volume deals with a different area of economic theory. The books include contributions by some of the best economic theorists from the United States, Japan, Israel and Europe.

Part I. Social Choice: 1. Consequentialist social norms for public decisions Peter J. Hammond 2. Information and invariance in normative choice Amartya Sen 3. Utilitarian morality in a world of very half-hearted altruists John C. Harsanyi 4. On the implementation of social choice rules in irrational societies Leonid Hurwicz 5. Walrasian social choice: some simple axiomatic approaches Louis Gevers Part II. Decision Making in the Public Sector: 6. Testing for optimality in the absence of convexity Herbert E. Scarf 7. Toward a theory of planning Michael D. Intriligator and Eytan Sheshinski 8. On the social risk premium David A. Starrett 9. A problem of financial market equilibrium when the timing of tax payments is indeterminate David F. Bradford 10. The shadow price of capital: implications for the opportunity cost of public programs, the burden of the debt, and tax reform Robert C. Lind.