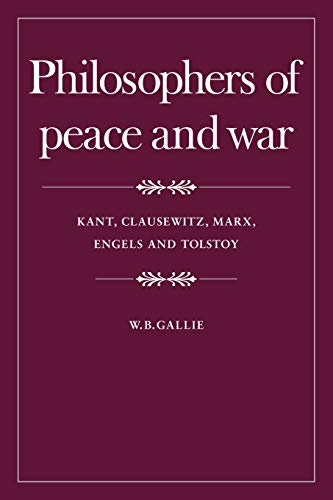 Intellectual eminence apart, what did Kant, Clausewitz, Marx and Engels, and Tolstoy have in common? Professor Gallic argues that they made contributions to 'international theory' - to the understanding of the character and causes of war and of the possibility of peace between nations - which were of unrivalled originality in their own times and remain of undiminished importance in ours. But these contributions have been either ignored or much misunderstood; chiefly because, as with all intellectual efforts in unexplored fields, they were often imperfectly expressed, and were also overshadowed by their author's more striking achievements. Professor Gallic has sorted out, compared and contrasted, criticised and re-phrased the teachings of his chosen authors on peace and war.

1. Introductory 2. Kant on Perpetual Peace 3. Clausewitz on the Nature of War 4. Marx and Engels on Revolution and War 5. Tolstoy: from War and Peace to The Kingdom of God is within You Concluding remarks.