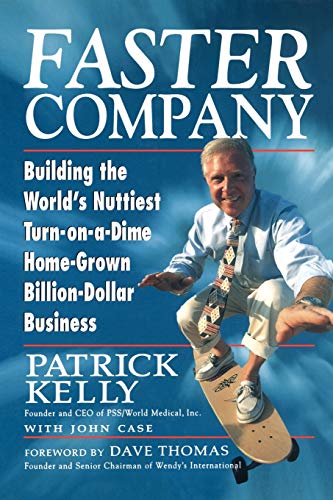 An unconventional management book by an unconventional businessman: how Patrick Kelly built a company where everybody works hard, has a great time, makes a ton of money--and leaves competitors wondering what hit them. Patrick Kelly is the founder of Physician Sales & Service (PSS), which in only 15 years has gone from a start-up company in the mundane business of distributing medical supplies to doctors' offices to the industry leader with $1 billion in revenues. Its annual growth rate is nearly 60% and today it has 3,600 employees. What's Kelly's secret? A dynamic, even nutty culture! PSS employees can fire their bosses. Truck drivers have "CEO" on their business cards. There are no policy manuals. The company's leaders--there's no such thing as a "manager" at PSS--are required to study Plato and Dostoevsky. Many have become millionaires, and despite the pressure, they love their jobs. PSS is that most unusual of organizations--a fast-track, high-growth business that's also a great place to work. Kelly himself is the ultimate success story: after growing up in an orphanage, flunking out of college, and serving in Viet Nam, he built an incredibly successful career--his way. In Faster Company, he tells you how he did it--how he built the company that has been dubbed "a cross between the U.S. Marines and Animal House." Patrick Kelly (Jacksonville, Florida) is Founder, Chairman, and CEO of Physician Sales & Service (PSS)/World Medical, Inc. It is the fastest-growing company in the history of the medical supply industry, with annual revenues for this year projected at $1 billion. Among his many awards, Kelly just received (along with Ted Turner) the Horatio Alger Award for 1997. John Case (Cambridge, MA) is editor-at-large for Inc. Magazine, and is the author of several books, including The Open-Book Experience. Marketing: National Publicity Campaign. 5-City Events Tour. National Advertising in the Wall Street Journal, The New York Times, and Harvard Business Review. Author Column in Inc. Magazine.