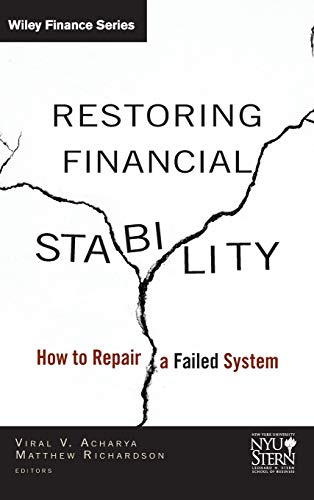 An insightful look at how to reform our broken financial system The financial crisis that unfolded in September 2008 transformed the United States and world economies. As each day's headlines brought stories of bank failures and rescues, government policies drawn and redrawn against the backdrop of an historic Presidential election, and solutions that seemed to be discarded almost as soon as they were proposed, a group of thirty-three academics at New York University Stern School of Business began tackling the hard questions behind the headlines. Representing fields of finance, economics, and accounting, these professors-led by Dean Thomas Cooley and Vice Dean Ingo Walter-shaped eighteen independent policy papers that proposed market-focused solutions to the problems within a common framework. In December, with great urgency, they sent hand-bound copies to Washington. Restoring Financial Stability is the culmination of their work.* Proposes bold, yet principled approaches-including financial policy alternatives and specific courses of action-to deal with this unprecedented, systemic financial crisis* Created by the contributions of various academics from New York University's Stern School of Business* Provides important perspectives on both the causes of the global financial crisis as well as proposed solutions to ensure it doesn't happen again* Contains detailed evaluations and analyses covering many spectrums of the marketplace Edited by Matthew Richardson and Viral Acharya, this reliable resource brings together the best thinking of finance and economics from the faculty of one of the top universities in world.