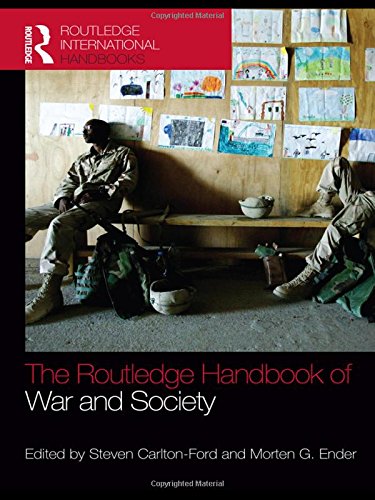 The Routledge Handbook of War and Society: Iraq and Afghanistan

This new handbook provides an introduction to current sociological and behavioral research on the effects of the wars in Iraq and Afghanistan. The wars in Iraq and Afghanistan represent two of the most interesting and potentially troubling events of recent decades. These two wars-so similar in their beginnings-generated different responses from various publics and the mass media; they have had profound effects on the members of the armed services, on their families and relatives, and on the people of Iraq and Afghanistan. Analyzing the effect of the two wars on military personnel and civilians, this volume is divided into four main parts: Part I - War on the Ground: Combat and Its Aftermath; Part II - War on the Ground: Non-Combat Operations, Noncombatants, and Operators; Part III - The War Back Home: The Social Construction of War, Its Heroes, And Its Enemies; and, Part IV - The War Back Home: Families and Youth on the Home Front. With contributions from leading academic sociologists, anthropologists, psychologists, military researchers, and researchers affiliated with Non-Governmental Organizations (NGOs), this handbook will be of interest to students of the Iraq and Afghanistan wars, military sociology and psychology, war studies, anthropology, US politics, and of youth. Steven Carlton-Ford is associate professor of Sociology at the University of Cincinnati. He recently served for five years as the editor of "Sociological Focus". Morten G. Ender is professor of sociology and Sociology Program Director at West Point, the United States Military Academy. He is the author of "American Soldiers in Iraq" (Routledge 2009).