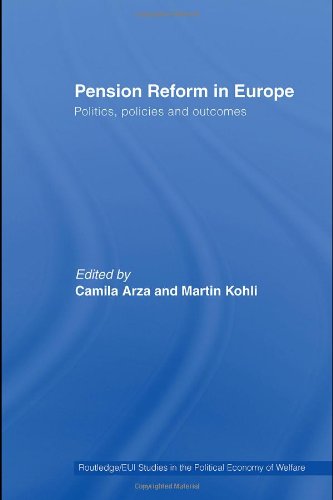 Pension Reform in Europe: Politics, Policies and Outcomes (Routledge Studies in the Political Economy of the Welfare State)

This new book provides a cross-country comparative analysis of the key issues shaping the latest pension reforms in Europe: political games, welfare models and pathways, population reactions, and observed and expected outcomes. Pension reform has been a top policy priority for European governments in the last decade. Ageing populations, changing labour market patterns and the process of European integration are the 'irresistible forces' pushing for reform throughout the region. &quot;The Political Economy of Pension Reform&quot; evaluates the political forces that make pension reform viable in different national and institutional contexts and the nature of political bargains, actors and cleavages surrounding policy change. The volume also examines the nature and outcomes of pension reform experiences in Europe, searching for a solution to the financial challenge posed by growing pension budgets. By addressing the nature of change, the pathways of reform, and the outcomes of the new pension mix in the region, the authors conclude with an analysis of people's perceptions and attitudes towards pension policy and their acceptance or otherwise of different reform options. This book will be of interest to students and scholars of international political economy, European politics, and social policy.