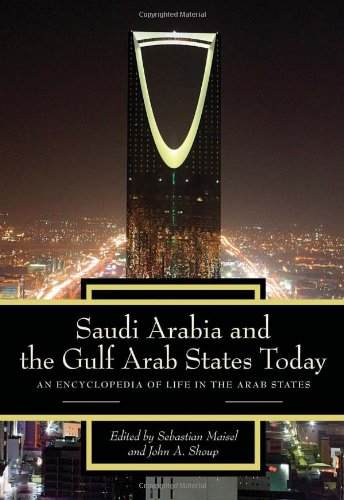 Saudi Arabia and the Gulf Arab States Today: An Encyclopedia of Life in the Arab States

This title provides broad coverage of the people and practices of Saudi Arabia and the Gulf Arab region. This extremely timely and helpful reference set will familiarize all readers with the Gulf region and Saudi Arabia, Bahrain, Dubai, the UAE, Kuwait, Oman, Yemen, and Qatar. These states are bound by the desert culture, the Gulf, new oil economy, and Islam, to name some commonalities. Most people are familiar with some aspects of the region, such as oases, dates, camels, oil, Bedouin tribes, and the tales of Lawrence of Arabia. Islamic concepts and practices are still unfamiliar. On one extreme, Saudi Arabia, the cradle of Islam, has been largely closed off to Western tourists. On the other extreme, Dubai courts tourist dollars as it constructs modern architectural showcases.This is the first A-Z encyclopedia to focus on the Gulf, illuminating the land, people, religion, culture and traditions, institutions, economy, and much more for general readers. The more than 200 essay entries have a current focus with historical context as necessary. The breadth of coverage means that this resource will be of use for a wide range of researchers and browsers. Besides individual entries on each state, major cities and regions are also profiled. The natural environment and human adaptation to it receives significant space. Islamic customs and rules and various interpretations are clearly explained. Essays on key public figures, institutions, major events, politics, and state structures and more also make this the first-choice resource for accurate information. Further reading accompanies most entries. The contributors have mined sources often not available in English. A chronology, selected bibliography, and photos complement the text.