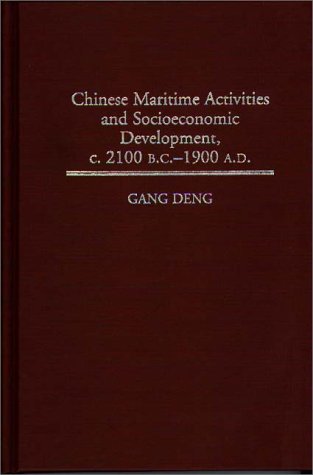 China's long-term maritime history has been overlooked by the scholarly community, so much so that there is a misconception that the Chinese were sea- or ocean-phobic. This image has been promoted rather deliberately because a sailing-aversive China would fit in well with the non-capitalist development framework. This study shows that from 2100 BC to AD 1900, the Chinese were as enthusiastic about and capable of seagoing activities as other peoples. Evidence shows that economic interests provided Chinese sailing-related activities with a lasting impetus, and the private sector played a central role. However, maritime activities in China raise at least two paradoxes: the activities were incompatible with the agrarian dominance in the Chinese premodern economy, and there was a huge gap between China's maritime potential and maritime growth. This situation was symptomatic of both positive and negative effects of technical and economic aspects of premodern China. Technologically, limited maritime growth resulted from climatic and hydrographic conditions favourable to agriculture. Economically, it resulted from low Chinese participation in maritime activities because of safe returns from the agricultural sector. This book provides readers with a long-term analysis of Chinese maritime activities and their economic consequences in industries, infrastructure, trade, migration and government policies. It provides an insight into the causes for sterility of capitalist industrialization in premodern China.