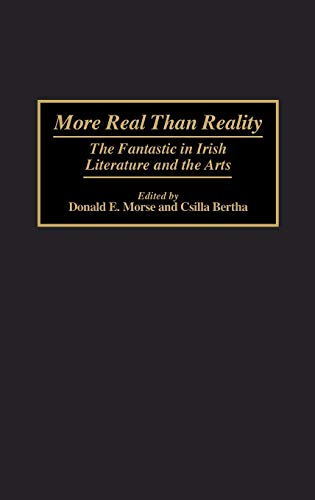 More Real Than Reality: The Fantastic in Irish Literature and the Arts (Contributions to the Study of Science Fiction & Fantasy)

For many people, the Irish and the fantastic are synonymous. From the ancient texts and medieval illuminated manuscripts to 20th century poetry, painting, drama, stories and novels, Irish writers and artists have found the fantastic not only congenial but necessary to their art. In his introduction to this collection of 15 essays that focus on the fantastic in Irish literature and the arts, Donald E.Morse contends that the use of the fantastic mode has allowed Irish writers and artists to express ideas, emotions and insights not available through the direct imitation of everyday reality. Morse argues that for the Irish, the road to insight was often through the territory of the marvelous and the fantastic rather than through literalism, rationalism or logic. In seeking to arrive at a definition of what consitutes the fantastic, Morse looks at work by Sean O'Casey and Seamus Heaney and finds that the fantastic occurs during encounters with what is considered to be the impossible, a concept contingent upon personal beliefs. To demonstrate how the fantastic may yield new insights into human beings, their behaviour, feelings and thoughts as well as lead to innovations in art, Morse scrutinizes "Circe" from James Joyce's "Ulysses", probably the most famous use of the fantastic in all modern Irish literature. The works of Yeats, Field, Shelly, Synge, Beckett, Swift and others are examined in chapters written from the point of view of the fantastic.