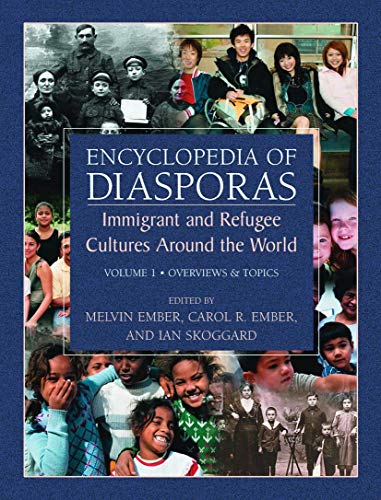 Encyclopedia of Diasporas: Immigrant and Refugee Cultures Around the World. Volume I: Overviews and Topics; Volume II: Diaspora Communities

Immigration is a topic that is as important among anthropologists as it is the general public. Almost every culture has experienced adaptation and assimilation when immigrating to a new country and culture; usually leaving for what is perceived as a "better life". Not only does this diaspora change the country of adoption, but also the country of origin. Many large nations in the world have absorbed, and continue to absorb, large numbers of immigrants. The foreseeable future will see a continuation of large-scale immigration, as many countries experience civil war and secessionist pressures. Currently, there is no reference work that describes the impact upon the immigrants and the immigrant societies relevant to the world's cultures and provides an overview of important topics in the world's diasporas. The encyclopedia consists of two volumes covering three main sections: Diaspora Overviews covers over 20 ethnic groups that have experienced voluntary or forced immigration. These essays discuss the history behind the social, economic, and political reasons for leaving the original countries, and the cultures in the new places; Topics discusses the impact and assimilation that the immigrant cultures experience in their adopted cultures, including the arts they bring, the struggles they face, and some of the cities that are in the forefront of receiving immigrant cultures; Diaspora Communities include over 60 portraits of specific diaspora communities. Each portrait follows a standard outline to facilitate comparisons. The Encyclopedia of Diasporas can be used both to gain a general understanding of immigration and immigrants, and to find out about particular cultures, topics and communities. It will prove of great value to researchers and students, curriculum developers, teachers, and government officials. It brings together the disciplines of anthropology, social studies, political studies, international studies, and immigrant and immigration studies.