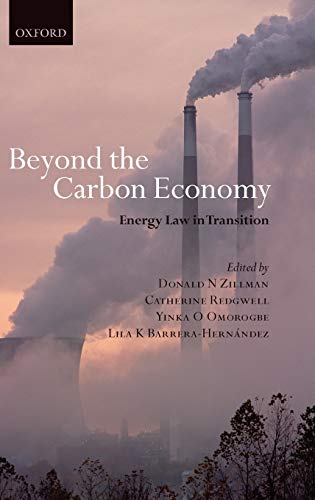 Beyond the Carbon Economy: Energy Law in Transition

The present energy economy, with its heavy dependence on fossil fuels, is not sustainable over the medium to long term for many interconnected reasons. Climate change is now recognized as posing a serious threat. Energy and resource decisions involving the carbon fuels therefore play a large role in this threat. Fossil fuel reserves may also be running short and many of the major reserves are in politically unstable parts of the world. Yet citizens in nations with rapidly developing economies aspire to the benefits of the modern energy economy. China and India alone have 2.4 billion potential customers for cars, industries, and electrical services. Even so, more than half of the world's citizens still lack access to energy. Decisions involving fossil fuels are therefore a significant part of the development equation. This volume explains how the law can impede or advance the shift to a world energy picture significantly different from that which exists today. It first examines the factors that create the problems of the present carbon economy, including environmental concerns and development goals.It then provides international and regional legal perspectives, examining public international law, regional legal structures, the responses of international legal bodies, and the role of major international nongovernmental actors. The book then moves on to explore sectoral perspectives including the variety of renewable energy sources, new carbon fuels, nuclear power, demand controls, and energy efficiency. Finally, the authors examine how particular States are, could, or should, be adapting legally to the challenges of moving beyond the carbon economy.

PART 1: SCOPING AND OVERVIEW 1. Introduction 2. The Impact on Health, Environment, and Sustainable Development: The TAANSAAFL Problem 3. Promoting Sustainable Development through the Use of Renewable Energy: The Role of the Law 4. The Law of Energy Efficiency PART 2: INTERNATIONAL AND REGIONAL PERSPECTIVES 5. International Legal Responses to the Challenge of a Lower-Carbon Future: Climate Change, Carbon Capture and Storage, and Biofuels 6. The Development of Renewable Energy Technologies and Energy Efficiency Measures through Public International Law 7. Are We There Yet? The Long Road to South America's Energy Future 8. Increasing Access to Clean Energy in Africa: Challenges and Initiatives PART 3: SECTORAL PERSPECTIVES AND TECHNOLOGY-BASED APPROACHES 9. Renewable Energy in National Legislation: Challenges and Opportunities 10. The Use of Market-Based Instruments in the Transition from a Carbon-Based Economy 11. Heavy Duty Transition Fuels: Oil Sands and Heavy Oil 12. Biofuels: EU Law and Policy 13. Reducing Carbon Emissions in Electricity Generation: Is the Answer Blowing in the Wind? 14. The Role of Law in the Future of Nuclear Power PART 4: NATIONAL PERSPECTIVES 16. China's Plight in Moving Towards a Low Carbon Future: Analysis from the Perspective of Energy Law 17. Energy for the Future: Brazilian Law and Policy 18. The Indian Way: Exploring the Synergies Between Development, Energy and Climate Goals 19. The Future of an Economy Based on Oil Exploitation: The Mexican Case 20. Law in the Schism: Its Role in Moving Beyond the Carbon Economy in Australia 21. In Search of the Optimum Energy Mix: Japanese Laws Promoting Non-Fossil-Fuel Energy 22. Energy Resources Management in Russia: Policy and Law 23. Diversified Leadership for Moving Beyond the Carbon Economy in the United States PART 5: PULLING THE THREADS TOGETHER: AN OVERVIEW OF THE CHALLENGES FOR LAW OF MOVING BEYOND A CARBON ECONOMY 24. Overview and Conclusions