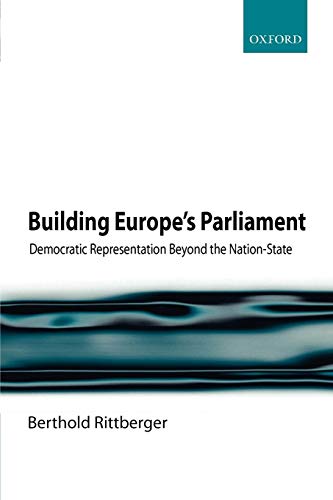 Why have the national governments of EU member states successively endowed the European Parliament with supervisory, budgetary, and legislative powers over the past fifty years? Building Europe's Parliament sheds new light on this pivotal issue, and provides a major contribution to the study of the European Parliament. Rittberger develops a theory of delegation to representative institutions in international politics which combines elements of democratic theory and different strands of institutionalist theory. To test the plausibility of his theory, Rittberger draws on extensive archival material and offers theory-guided, in-depth case studies of three landmark decisions in the history of the European Parliament: the creation of the Common Assembly of the ECSC in 1951 and the concomitant acquisition of supervisory powers vis-a-vis the quasi-executive High Authority; the delegation of budgetary powers following the signing of the Treaty of Luxembourg in 1970; and the delegation of legislative powers resulting from the adoption of the Single European Act signed in 1986. This is followed by the charting of more recent key developments, culminating in the adoption of the Constitutional Treaty in 2004. The book provides a welcome addition to the literature on institutional design by reflecting on the conditions under which governments opt for the creation and empowerment of parliamentary institutions in international politics. It is also makes a valuable contribution to the application of democratic theory to the study of the European Union by demonstrating that political elites shared the view that the new supranational polity which emerged from the debris of World War II suffered from 'democratic deficit' since its inception, thus disproving the claim that the lamented 'democratic deficit' is a recent phenomenon.

Introduction: Building Europe's Parliament PART I: THEORY 1. The Empowerment of the European Parliament: Lessons from the New Institutionalism and Democratic Theory 2. Parliamentary Institutions in International Polities: What are the Conditions? PART II: THE EUROPEAN PARLIAMENT'S POWER TRIAS 3. The Origins of the Common Assembly of the European Coal and Steel Community 4. Budgetary Powers and the Treaty of Luxembourg 5. Legislative Powers and the Single European Act 6. From Maastricht to the Constitutional Treaty: The Return of National Parliaments? Conclusion: No Integration without Representation? Bibliography