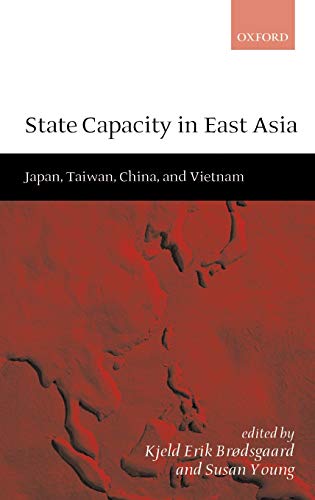 State Capacity in East Asia examines states and state capacity in four countries - China, Japan, Taiwan, and Vietnam - that have experienced rapid economic growth over several decades. The book is informed by the view that even though modern market forces and transnational corporations exert new pressures which erode some powers formerly held by the nation-state, it is much too early to declare the state dead. The modern state is constantly being shaped by social interaction in a process of mutual empowerment at both the central and local level. States also have a history which is built into their structures and ideology and will influence the way they change and adapt to outside pressures. The book argues that the capability to adapt and to develop new capacities and institutions is at the heart of the Asian states' recovery from the deep economic and social crisis of the late 1990s.

1. Introduction: State capacity in East Asia 2. The weak state of Japan 3. State and economy: some observations and inferences from the Japanese experience 4. Institutionalizing post-war Japanese political economy: industrial policy revisited 5. The waning of the Kuomintang state on Taiwan 6. State capacity in an Asian democracy: the example of Taiwan 7. State capacity in the ROC and PRC: a comparative perspective 8. When states unravel: how China's cadres shaped Cultural Revolution politics 9. State capacity and social control in China 10. Informalization and growth: the political economy of local enterprises 11. What the Vietnamese state can do 12. China and Vietnam: viable socialism in a market economy