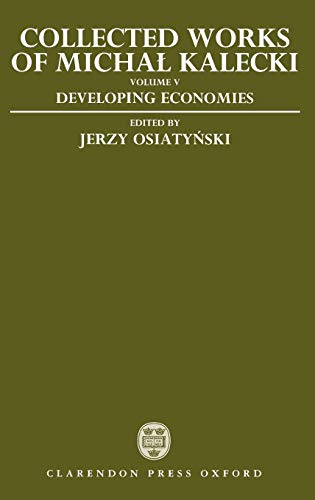 This is the fifth of seven volumes comprising the definitive scholarly edition of the works of Michal Kalecki, one of the most distinguished 20th-century economists. This volume contains Kalecki's studies on the theory and practice of economic development. Its first part is devoted to general problems of economic underdevelopment. 'Observations on Social and Economic Aspects of "Intermediate Regimes"' is his best-known paper here, but the other two papers are equally important for the understanding of Kalecki's approach to problems of the underdeveloped non-socialist countries. In Part 2, 'The Problem of Financing Economic Development', published in Mexico in 1953, attracted great interest and possibly gave rise to a new school of thought (that is, Structuralism) in development economics. Part 3 contains Kalecki's four empirical case studies on development problems of Israel, India, Cuba, and Bolivia. As in the case of his work on the capitalist and the socialist economies, his studies on the economic development of underdeveloped countries are deeply rooted in their specific social and political conditions.