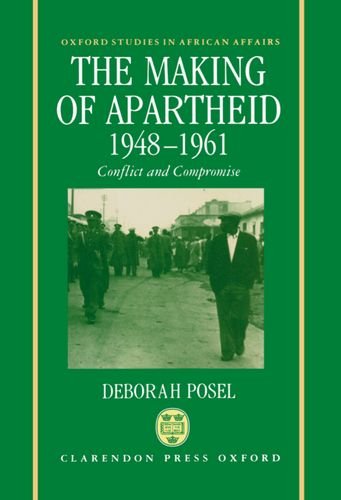 The Making of Apartheid 1948-1961: Conflict and Compromise (Oxford Studies in African Affairs)

Deborah Posel breaks new ground in exposing some of the crucial political processes and struggles which shaped the reciprocal development of Apartheid and capitalism in South Africa. Her analysis debunks the orthodoxy view which presents apartheid as the product of a single 'grand plan', created by the State in response to the pressures of capital accumulation. Using as a case study influx control during the first phase of apartheid (1948-1961), she shows that apartheid arose from complex patterns of conflict and compromise within the State, in which white capitalists, the black working class, and popular movements exercised varying and uneven degrees of influence. Her book integrates a detailed empirical analysis of the capitalist State and its relationship to class interests.