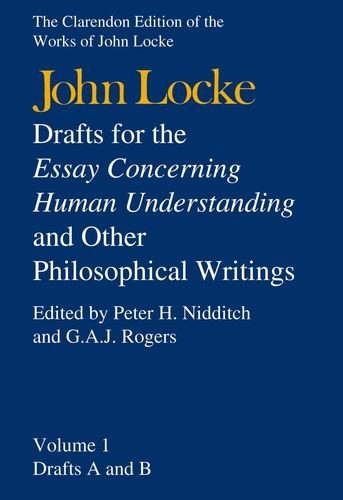 This is the first of three volumes which will contain all of Locke's extant philosophical writings relating to An Essay Concerning Human Understanding, not included in other Clarendon editions like the Correspondence. It contains the earliest known drafts of the Essay, Drafts A and B, both written in 1671, and provides for the first time an accurate version of Locke's text. Virtually all his changes are recorded in footnotes on each page. Peter Nidditch, whose highly acclaimed edition of An Essay Concerning Human Understanding was published in this series in 1975, used pioneering editorial techniques in his compilation of Volume 1. Most of the work was completed before his tragically early death in 1983. Volumes 2 and 3, almost wholly the work of G. A. J. Rogers will contain the third extant draft of the Essay (Draft C), the Epitome and the Conduct of the Understanding. They will also include a History of the Writing of the Essay, together with other shorter writings by Locke.

Introduction Locke's Essay and its manuscript sources The contents of drafts The production of this volume The manuscript sources of the texts History of the manuscripts Previous publications The editorial principles of this edition The text: Draft A Draft B contents Draft B Appendices: Comparative table of draft A and the Essay Comparative table of draft B and the Essay The allograph copy of draft A The editorial method of Peter Nidditch