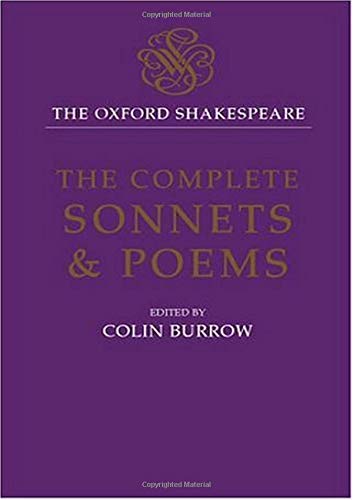 The Complete Sonnets and Poems (The Oxford Shakespeare)

Shakespeare's Sonnets are among the most complex and beautiful poems ever written. Their exploration of love, praise, homo- and hetero-sexual desire is enacted in the richest, densest writing in English. And the first printed work to which Shakespeare's name was attached was the erotic narrative poem, Venus and Adonis, which developed a sumptuous vocabulary in which to explore love, praise of the beloved, sexual desire, and the power of rhetoric. That poem was so popular that most of Shakespeare's contemporaries thought of him as primarily a poet, rather than a playwright. Yet despite the power of Shakespeare's poems, and their foundational place within his oeuvre, modern readers have seldom been encouraged to engage with his non-dramatic works as a whole. This new edition explains how this state of affairs has arisen, and why it needs to be changed. The volume contains the complete Sonnets and poems with a full commentary. An extensive and lively introduction explores Shakespeare's poetic development, and shows how the poems relate to each other and to his dramatic works. The Sonnets are freshly interpreted, not as cryptic fragments of autobiography, but as works which ask their readers to think about relationships between lyric poems and the historical circumstances which may have given rise to them. The narrative poems Venus and Adonis and Lucrece are placed where they belong, at the origin of Shakespeare's thinking about what it means to desire and to be desired. The edition responds to the most recent scholarly work on the interpretation and dating of Shakespeare's poems and Sonnets. It also explores what the poems may have meant to their earliest readers. For this reason it also includes poems attributed to Shakespeare in the seventeenth century, as well as those printed under his name in The Passionate Pilgrim in 1599.