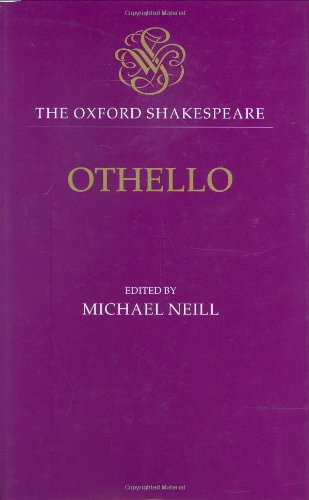 Written at some time between 1602 and 1604, Othello belongs to the period in which Shakespeare's powers as a tragic dramatist were at their peak. On stage, the romantic cast of its story and the remorseless drive of its plotting, combined with operatic extravagance of its emotion and the swelling music of its poetry, have made it amongst the most consistently successful of his tragedies; and numerous anecdotes testify to its extraordinary capacity to overwhelm the imagination of an audience. In recent times the play's bold treatment of love and marriage across the divide of race has made it a work of particular interest to theatre directors and scholars alike. Yet Othello's critical fortunes have been uneven; for, since Rymer's notorious denunciation of this 'tragedy of [a] handkerchief,' at the end of the seventeenth century, its claim to rank amongst Shakespeare's greatest achievements has been challenged by critics who have found its plot too strained, its characters too improbable, and its tale of marital jealousy and murder too meanly domestic to challenge comparison with Hamlet, King Lear, Macbeth, or even that saga of tragic infatuation, Antony and Cleopatra. The extensive introduction to this new edition answers the play's detractors by stressing the public dimensions of the tragedy, paying particular attention to its treatment of colour and social relations. Although 'race' in the early modern period was still an embryonic category, Othello is explored as a text that-not least in its performance history-has played a formative role (for both good and ill) in the emergence of racial thinking, and that as a result remains deeply controversial. In the play's own time, however, the sensitivities aroused by the hero's colour might well have seemed less significant than the way in which Iago's perfidious role plays out a crisis in the institution of service on which the entire social order, including its treatment of gender, was founded. In this respect, too, Othello emerges as a work profoundly involved in the social and political processes that helped to shape the modern world. The text has been freshly edited in accordance with the general principles of the series. Othello has come down to us in two markedly different early texts; and the substantial differences between the 1622 Quarto and the 1623 Folio have led to its becoming involved, along with Hamlet and Lear, in an intense debate over Shakespearian revision. Michael Neill argues however, that, in the case of Othello, variation is much less likely to be the result of changed authorial intentions than of theatrical cutting and the peculiar circumstances of textual transmission. While the Folio is generally the more reliable of the rival versions, the Quarto's origin in a text that has been modified for performance text make it indispensable, and the two have been fully collated. This edition also makes full use of the Second Quarto (1632) a text which, although it is without independent authority, preserves important textual decisions made by an intelligent and well-informed editor nearly contemporary with the dramatist himself. Further appendices include a discussion of dating problems, an account of the music in the play, and a full translation of the Italian novella from which the story derives. The detailed commentary is designed to alert readers to the play's theatrical life, as well as helping them to explore its rich language and notoriously treacherous word-play.