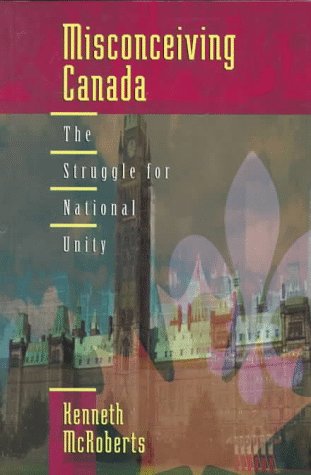 In the fall of 1996, the prospects for Canada looked bleak; of the many unity crises that Canada has known, this one is undoubtedly the worst. The November 1995 referendum on Quebec sovereignty produced the smallest of victories for the forces of federalism: 0.06 per cent or 54,288 votes; it could easily have gone the other way. Moreover, surveys have regularly indicated that in a new referendum the Yes vote could prevail. If there ever was a last chance for Canada this would seem to be it. This book begins by exploring the deep historical roots of the conception of Canada that Trudeau and his colleagues tried to change. The book then moves on to examine how successive governments tried to re-examine the relationship between Quebec and the rest of the country. McRoberts examines the role of the Trudeau government, official bilingualism, multiculturalism, the Mulroney era, and the failures of both the Meech Lake and the Charlottetown Accords. The final chapter of the book examines the 1995 Quebec referendum with its near victory of the Yes vote, which can only be seen as proof of the failure of the Trudeau strategy, and the current federal government's failure to deliver meaningfully on promises made during the referendum. The conclusion begins with a review of this critical reassessment of the strategy and its consequences for Canada. It then maps out some of the routes to resolving the crisis that became available once that strategy has been abandoned: formalizing asymmetry within Canadian federalism, revising language policy on a territorial basis, recasting Canada as a multinational confederation, and so on. Whether any of this can be done, however, is an open question. Yet if Quebec should opt for sovereignty it will be important to remember that Canadians and Quebecois are not naturally the worst of enemies as some have claimed, and would still have common interests that needed protection. This volume will explore ways to doing this. In the last analysis, as this book shows, a vote for sovereignty is not inevitable but would be the result of errors and miscalculations that were made, often with the best of intentions, by our political class. In particular, it would have stemmed from a national unit strategy that was based on a misconception of Canada.

Introduction: What Went Wrong? PART ONE: TWO VISIONS OF CANADA 1. The First Century: Separate Nationalities 2. The 1960s: Coming to Terms with Duality and Quebec Nationalism 3. Trudeau and the New Federal Orthodoxy: Denying the Quebec Question PART TWO: MAKING A NEW CANADA 4. Official Bilingualism: Linguistic Equality from Sea to Sea 5. Multiculturalism: Reining in Duality 6. Federalism and the Constitution: Entrenching the Trudeau Vision 7. The Failure of the Trudeau Strategy PART THREE: FAILING TO REPAIR THE DAMAGE 8. Bringing Quebec into the Constitution: Missing Two Chances 9. The 1995 Quebec Referendum: Making Sovereignty a Real Possibility 10. Conclusion: Is Separation the Only Answer? Bibliography Index