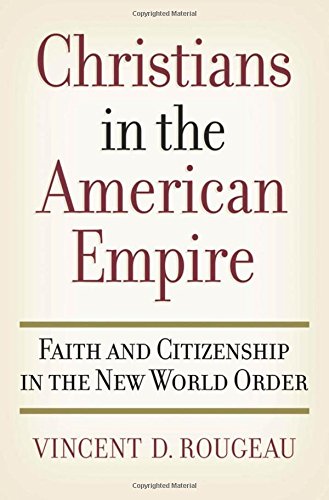 Christians in the American Empire: Faith and Citizenship in the New World Order

What does it mean to be a Christian citizen of the United States today? This book challenges the argument that the United States is a Christian nation, and that the American founding and the American Constitution can be linked to a Christian understanding of the state and society. Vincent Rougeau argues that the United States has become an economic empire of consumer-citizens, led by elites who seek to secure American political and economic dominance around the world. Freedom and democracy for the oppressed are the public themes put forward to justify this dominance, but the driving force behind American hegemony is the need to sustain economic growth and maintain social peace in the United States. This state of affairs raises important questions for Christians. In recent times, religious voices in American politics have taken on a moralistic stridency. Individual issues like abortion and same-sex marriage have been used to 'guilt' many Christians into voting Republican or to discourage them from voting at all. Using Catholic social teaching as a point of departure, Rougeau argues that conservative American politics is driven by views of the individual and the state that are inconsistent with mainstream Catholic social thought. Without thinking more broadly about their religious traditions and how those traditions should inform their engagement with the modern world, it is unwise for Christians to think that pressing single issues is an appropriate way to actualize their faith commitments in the public realm. Rougeau offers concerned Christians new tools for a critical assessment of legal, political and social questions. He proceeds from the fundamental Christian premise of the God-given dignity of the human person, a dignity that can only be realized fully in community with others. This means that the Christian cannot simply focus on individual empowerment as 'freedom' but must also seek to nurture community participation and solidarity for all citizens. Rougeau demonstrates what happens when these ideas are applied to a variety of specific contemporary issues involving the family, economics, and race. He concludes by offering a new model of public engagement for Christians in the American Empire.

PREFACE INTRODUCTION 1. Old-Time Religion in a Free Market Empire 2. Combining Faith and Reason in the Modern World Through Catholic Social Thought 3. Justice, Community and Solidarity in the American Battle over Affirmative Action 4. Enter the Poor: American Welfare Reform, Solidarity and the Capability of Human Flourishing 5. Fear of the Other 6. Christian Cosmopolitans in the American Empire CONCLUSION